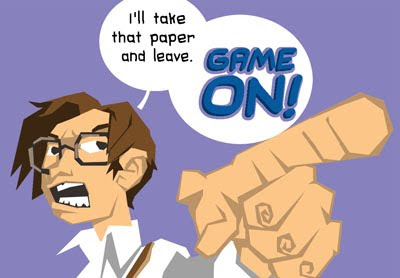 Another sneak peak at the Herman Heed story I'm working on. 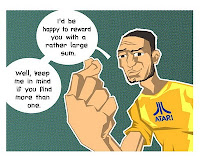 The client has been very nice and moved the deadline back, which allowed me to do some conventions and get the new issue of GhettoManga Quarterly finished. People have often described self-publishing and working for clients as "doing it for the love vs. doing it for the money"... I have trouble with defining it that way. My intent is to ALWAYS make money from my art, even the super artsy fartsy paintings I do are for sale. I would sell pages out of my sketchbook if I thought people would buy them. So yeah, I know GhettoManga (which features my ultra-violent comic Manchild among other things) isn't for everyone, but I would hope that I could get paid for it... I only make a little money from it now, but I want that to change. 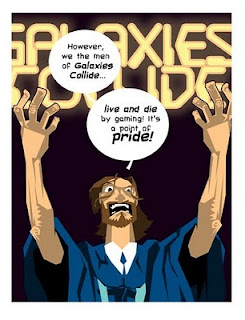 On the other side, the work I do freelance (i.e. "for the Money") is fun stuff, too. I have been lucky so far in my funnybook career in that I haven't had to do any comics I would not like to read.  The freelance Illustrating jobs I've taken have also been more good than bad. Some clients are less fun to work for than others, but the less fun ones tend to go away after one or two jobs. Thankfully, the people I love to work for love to pay for my work. At this stage, I am getting more work that is specific to my particular style and skill set, which helps me enjoy it more (yes! It's easier to work for a client that loves your work than one who keeps telling you to "draw more like Jim Lee").  When I first started, most of the work I got offered was for jobs I wasn't really suited to... which lead to me not enjoying them (whether the client liked them or not). These days, I turn down stuff if I think I will hate it. Or refer the prospect to another artist I think will enjoy it better. That's a practice I recommend to all working artists. That would help close that Love/Money divide for all of us. 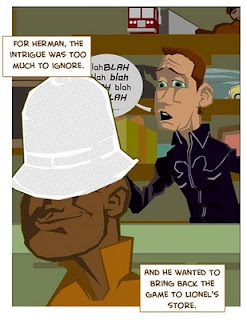 Anyways, with the con season over, and the new issue of GhettoManga off to the printer, I'm (re)turning my focus to Herman Heed, so as to (hopefully) finish The Case of the Most Valuable Videogame Ever Made (or as I like to call it Most Valuable) ahead of deadline. Maybe if you're good, I'll leak some of it! Meanwhile, GhettoManga Quarterly is available for preorder, so if you're interested click here. If you need me I'll be at the old drawing board!
holla!
-samax
Ziontific.com
Posted by Samax on Sunday, September 05, 2010