Here's a list of characters in that "DARE: SHOOK" cover drawing from the #sketchbook archives, for those who missed it 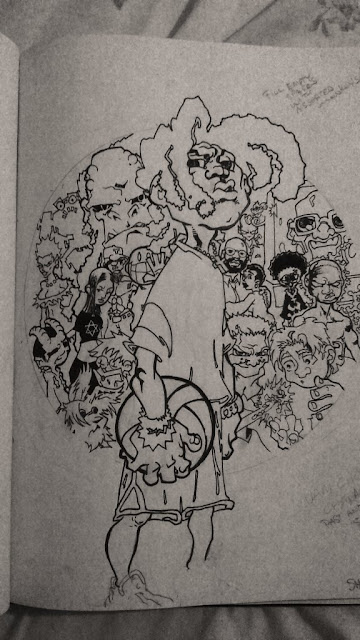 Nobody asked me who the characters were in this drawing when I posted it on Twitter, but I will geek out about my art even if you don't, so here's a list- top to bottom, left to right- of characters in this drawing of teen action hero Darius "Dare" Davidson.

In a perfect world, I would be writing and/or drawing 4 or 5 comics a month to get out all the dopeness in my brain.  Barring that, I use sketchbooks to work out the details of the comic book universe that overlaps all the characters and ideas I have invented since grade school. Which ever comic of mine eventually catches on will have all that continuity filling the margins.  At the time I drew this cover, the likely suspect was my non-super powered adventurer Darius Davidson.

I drew this as a cover concept for the the long-awaited miniseries DARE: SHOOK, which tells the origin story of Darius Davidson, who has appeared in a few anthologies, but not yet had his own full-length comic. The story is written (on paper even!), and all the character designs for SHOOK have been done for years, just waiting for me to have the time to draw it (No one is gonna pay me to draw my own comics, unless you CLICK HERE to join my Fan Club, that is...), so I gotta put in some time on these freelance assignments!
But yo, let me know what you think of the sketch, and ask me if you have questions about Dare or any of the characters in the drawing! 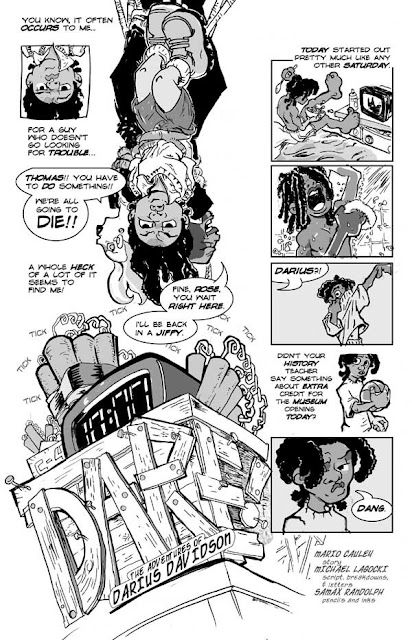 Also, I still have copies of GhostWerksComics #1, in which Dare faces off against Dr. Bombay and the Bomb Boyz, so click here to buy a copy!Or better yet, click the Subscribe link to sign up to a 1 year membership in my Fan Club, and I'll send you a copy of GhostWerksComics #1 as a thank you gift, along with a sweet Samax Amen Fan Club membership card, and other free goodies throughout the year! It's my thanks for supporting my waking dream of making comics!


Anyways, thanks for reading, and have  great day!