did I mention STAPLE was AWESOME? Well, yeah... it was! 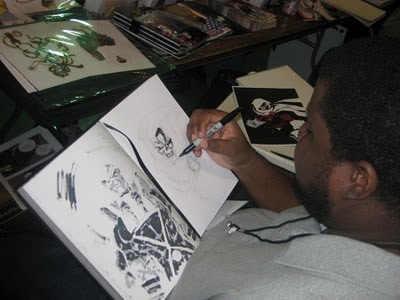 I had a blast at STAPLE indie media expo in Austin, TX. Here's photo of me drawing Taskmaster for a commission (I make a lotta my con money from commissions). I didn't bring a camera, so this
photo and the one below were both taken by Bram Meehan of 7000 BC  who was set up at the table next to me. Someday I'll start taking a camera (or a decent cameraphone) to shows so everyone can get a look at the con sketches I do... 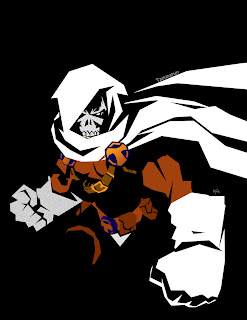 Believe it or not, this was the first of TWO drawings of Taskmaster I was asked to draw that day! Apparently I draw a pretty good Taskmaster, 'cause before I was done with this one, I was asked to draw another one. In addition to the two sketches of the character I drew, I also sold 3 copies of my Daily Sketch Challenge Taskmaster print, Mister Me Too (left), making it my most popular print of the con. That's gotta be my personal convention record of pieces sold featuring a character I didn't create. Not bad for a fairly obscure character... 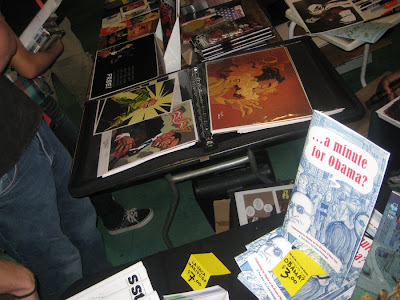 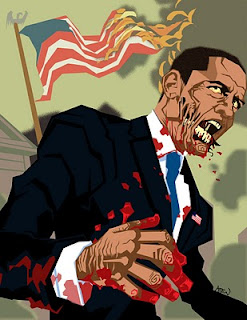 by Carol Holsinger, who took time off from work to campaign for then-senator Obama's Presidential campaign, while right next to it was my print Just Another Victim, which portrays Obama as a zombie. Many discussions were sparked by this, as you might expect.
I bought a copy of the book. It was pretty good... I'm gonna write reviews of all the books I got at STAPLE on my blog at GhettoManga.com when I get around to it...

If you want a copy of Mister Me Too or Just Another Victim, just paypal $15 each to Samax [at] Samaxamen.com and I'll mail 'em out to you. I have lots of stuff I need to mail to people who've been waiting patiently (you know who you are!), so expect them within' two weeks, everybody!
Ziontific.com
Posted by Samax on Wednesday, March 16, 2011

Good to see you, man! I finally got eyes on the GhettoManga issue I picked up.... That was a well-put together magazine! Nice work!

Thanks, Dan! Hopefully, the next one will be even better!