As you may know, I was commissioned to do a tee-shirt design for one of my favorite emcees, Playdough of the mighty Deepspace 5 crew, to coincide with the release of his new album Hotdoggin'...


The deadline was very tight, and I was restricted to only 2 colors (on a black tee), both of which made this somewhat nerve-wracking (plus, I REALLY wanted Playdough to like it)... After struggling with some other complicated ideas that were not working at all, I watched this promo video for inspiration and decided I HAD to draw him skateboarding in a hotdog suit. 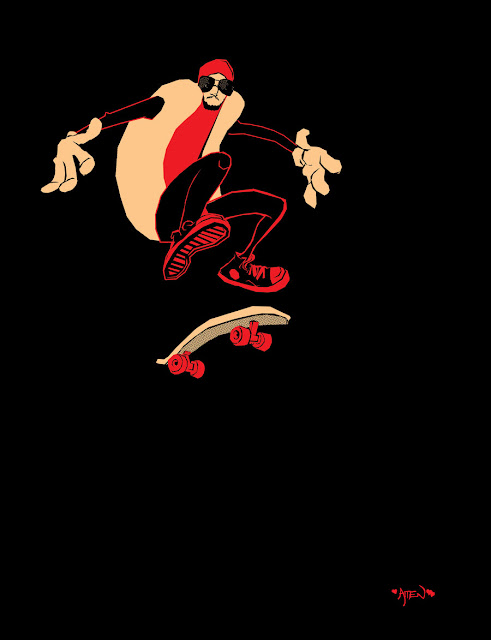 I like trying complicated stuff, but my talents are suited to keeping it simple. The final teeshirt artwork actually has text on it and a different composition (I'll post it up whenever Playdough starts taking preorders), but I will include this as a page in my artbook I'm working on whenever it comes out. 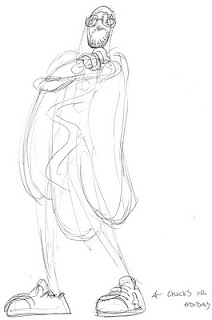 Here's another ballpoint pen sketch that I didn't use... I may actually finish it and make prints if I have time. The release party for the album is in Dallas on April 29th, and area art crews ArtLoveMagic and the Just.Us.League (both of which I am a part of) will be in attendance creating live art, so I want to produce of few printed treats that will appeal to the rap nerds and art geeks (again, I belong to both groups) that will be floating around the room sipping brew...
These days, I'm loaded with stuff I need to work on, and I don't get nearly enough sleep (yeah, I have a 2 year old daughter too...), but dang it, I sure am having fun!
holla!
-samax
Ziontific.com
Posted by Samax on Tuesday, March 22, 2011

Wow what a cool opportunity dude good for you! Yea playdough is a fav of mine too. Can't wait to see the final product man!

Thanks, Plex! A very exciting opportunity! I'll def post again once Playdough fires up the preorders!