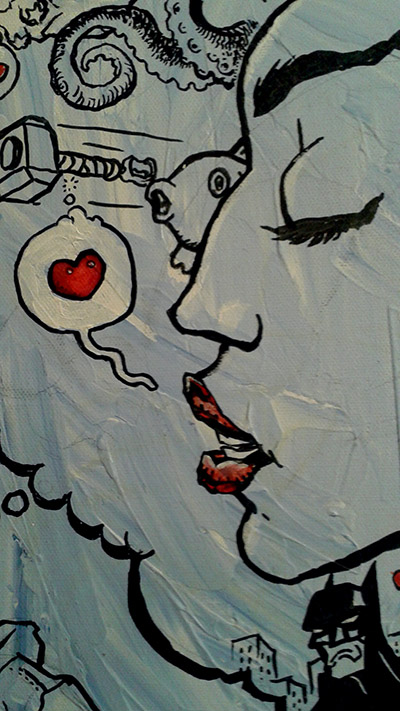 Here's a bunch of detail photos and notes about my new piece, Stream of Consciousness.  This one is another example of a piece where I made it up as I went along, not really sure if it would become a "real" piece of art, or just practice... 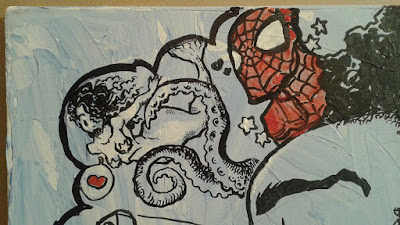 I initially painted the background with a palette knife, mixing the blue and white on the canvas to establish an expressionistic field of color.  Sometimes I cover canvases with excess paint from another painting and set it to the side, just so when I get to it, I will not be intimidated by a blank canvas.  Here, I took this one and just started drawing a girl with an afro, which I am pretty good at by now, so I thought I had something.  The hard thing about working without a plan though, is that I don't know when I'm finished.  I wasn't... 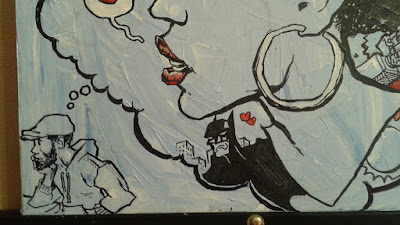 So I kept going.  Then it occurred to me to I could make this one of those daydream drawings, and to embrace the spontaneity of it.  Then I turned a corner, using the thought balloon as a device to tie it together and injecting anything I could think of into it. 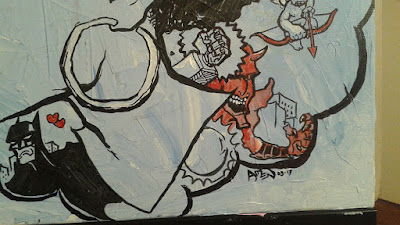 I decided I would limit the color, because I felt like it could easily get out of control.  So I spotted red around a little bit.  Unfortunately, the afro lady was dominating the piece a little too much, so I went into it with some white to allow me to draw more randomness into that space... 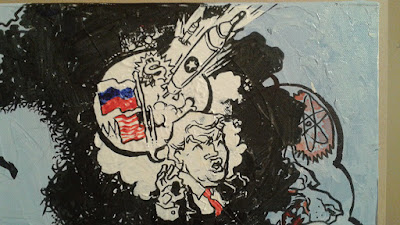 Yeah, this is my first attempt at drawing President Trump in a gallery piece.  I'm pretty happy with it.  I went against my first intent with the color and added some blue so I could detail the Russian flag overlapping the American flag behind Trump. Again, I leaned on my comics background using a speech balloon to showcase abstractions of some of the concerns about the new President.
So I eventually felt comfortable calling this one done.  Stream of Consciousness will make its public debut at DECADE: ArtLoveMagic's 10th Anniversary Celebration this Saturday, but you can purchase the original piece or a print right now. Just click the yellow Add to Cart button below.  Let me know if you have any questions!

Click the jar to leave a tip!
Join AMENSIDERS (the Samax Amen Fan Club) for $10 a month! Get Stuff! 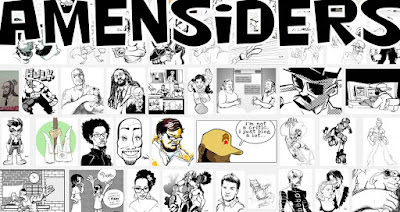