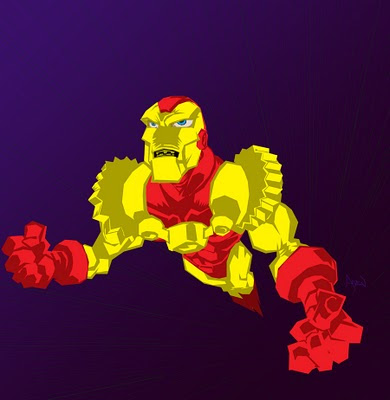 . The future Stark inherited Stark Enterprises from Morgan Stark (Tony's cousin) and uses the Iron Man armor to take down his corporate rivals and moonlights as a high-tech mercenary. Arno's Iron Man armor is similar to the classic (mark 5) armor, except it's built for war, not superheroics (ex. repulsors always fire at maximum power... YIKES!)
anyways, I drew this in Photoshop... it took about 45 minutes. I was really getting into it with the details and stuff... I'll probably tweak it some more later.
Hope you like it... i PROMISE the next one will be under the 30 minute time limit!
holla!
-samax
Ziontific.com
Posted by Samax on Thursday, July 29, 2010