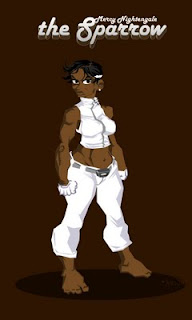 when Corance first brought the Sparrow to me in the late nineties, it was a comic about a female college student/ super babe similar to batgirl or any other masked vigilante comic. over the years, I have watched Corance shed the conventions that were forced and uncomfortable to him and add things that didn't make sense to me at first, until the current incarnation of the character bares little resemblance to that old concept, or any comic you are currently reading for that matter. I feel confident that when the the martial arts/ urban western adventures of the magnificent Mercy Nightengale (aka The Sparrow) eventually see print (or web, as the case may be), she will catch her unsuspecting future fanbase completely off-guard! and they will LOVE her for it!
anyways, i drew this in photoshop, like the rest of these designs. hope y'all like it!
-samax
Posted by Samax on Sunday, November 29, 2009