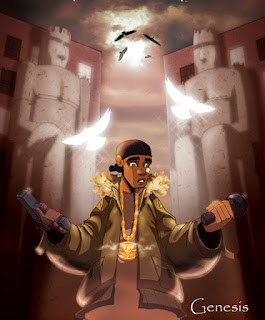 I was elated to see the Davis brothers (better known as the Mad Twinz) backing our Champion of Children fundraiser on Kickstarter. The Twinz took the indie comics scene by storm with the release of their hip hop fantasy comic-turned-graphic novel-turned animated series Blokhedz. With cats like Talib Kweli and the RZA on the roster of voice talent for their animated project, you get an idea of their stature... which is why I'm honored that they are so supportive of the Champ!

I'm doing free caricature sketches of the first 30 backers, and as of this moment, there are 7 spots left. We've already reached our first goal, now I want to help get the Champ Kickstarter up to thirty backers!  Click here for more info, to see the rewards, and to get your pledge in! Even though we have passed our goal, you won't be charged anything until after Independence Day, so go ahead and pledge today!